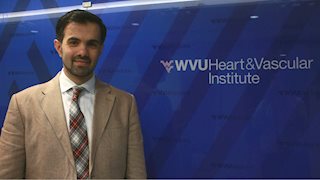 MORGANTOWN, W.Va. – A new study by a team of researchers, including Mohamad Alkhouli, M.D., medical director of the structural heart program at the WVU Heart and Vascular Institute, used patient data to study the outcomes of patients who require percutaneous coronary intervention (PCI) after coronary artery bypass grafting (CABG) procedures before being discharged.

The study looked at data from more than 500,000 patients who underwent CABG between 2003 and 2014. It found that up to 5 percent of these patients required urgent coronary angiography either with or without PCI to address graft failure or the use of stents to open arteries that were not bypassed surgically. Despite stenting, those patients had higher in-hospital mortality, complications, and cost.

“This study highlights that urgent in-hospital salvage PCI after CABG is uncommon, but it is associated with poor outcomes,” Dr. Alkhouli said. “This is an exploratory study to highlight the issue of acute post-CABG ischemia, which appears to be more common than what is previously thought.”

The researchers worked to identify factors that contribute to the need for urgent PCI after CABG. They found that patients who had emergent CABG were more likely to require PCI compared to those who were admitted electively for surgery. Other factors included patients who had off-pump bypass procedures and those who underwent surgery at low volume centers.

The study, titled “Incidence, Predictors, and Outcomes of In-Hospital Percutaneous Coronary Intervention Following Coronary Artery Bypass Grafting,” was published in the Journal of American College of Cardiology on Feb. 5.