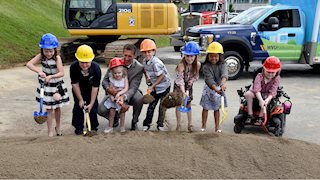 On June 4, seven current and former WVU Medicine Children’s patients grabbed a shovel and a hard hat to turn some dirt at a ceremonial groundbreaking for a $150-million hospital that will revolutionize the care of women and children in West Virginia and the region.

Hundreds turned out for the event, which featured these speakers:

“This is our moment,” Dr. Saul said. “We’re already the center for specialty care to high-risk mothers, premature infants, and children with life-threatening conditions through adolescent to adulthood. The need for our services is growing at such a rapid pace that the creation of this hospital is a must.”

The 155-bed, eight-story facility is scheduled to be completed in 2020. The tower will include:

All of the inpatient rooms will be private, except for 11 NICU rooms for twins. The tower will also include inpatient and outpatient pharmacy facilities and a cafeteria.

“As spectacular as the building will be, it won’t compare to the miracles that will happen inside,” Holgorsen said.

The West Virginia Health Care Authority approved a Certificate of Need for the project last month.