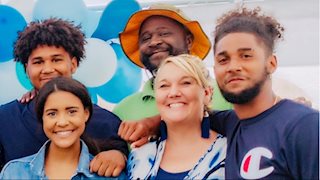 DUNBAR, WV (from Cassidy Wood - WOWK) – “I wanna thank everyone for coming…and my choice in college to go play football is WVU.”

Donavin Davis, South Charleston High School Black Eagle wide receiver and defensive back, is signing his next four years of football committing to play for the WVU Mountaineers.

The announcement has special meaning at the WVU School of Medicine Charleston Campus, where Donavin’s mom Charissa Davis is a medical student coordinator.

For Donavin, a star wide receiver and defensive back for the team who snagged state this year; this season was unlike any other.

Some weeks, they played… and others, they didn’t.

“They only played 6 games,” mom Charissa said. “And in those 6 games he had 600 receiving yards and 11 receiving touchdowns. Which is crazy. So he had a heck of a senior season even with only 6 games.”

“[It was] very weird,” said Donavin. “But I’m glad we got to play and get on the field and we took the state championship too.”

And trying to get signed was quite different too.

“The recruiting process was crazy during COVID for all the kids around the nation,” said Charissa. “It seems like Twitter is where it’s at for recruiting.”

But even though this was an odd season, Donavin stayed dedicated to accomplishing this end goal…with some special help.

“Donavin works harder than anybody I know,” said Charissa. “Over the summer he’d be at the field until 10, 11 by himself.. the lights would be off… and I would be screamin’ from the car ‘Come get in the car!’”

And he got some advice from a familiar face.

“Drew. He was a big star at South Charleston and he’s told me a lot about WVU,” said Donavin. “He said I’ll like it. And it’ll be hard the first couple years getting the workouts down, but I’ll be good.”

An exciting move for our area… and this state.

“I know for a fact I’ll be happy,” said Donavin. “Because that’s been my dream school to go to and that’s where I wanna go for sure. I love the football team. Academics are great. Coaching staff is great. I just love how everything works down there.”