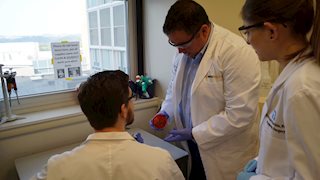 MORGANTOWN, W.Va. – For a third time, the West Virginia Clinical and Translational Science Institute (WVCTSI) has received a $20 million, five-year grant awarded through the National Institutes of Health’s Institutional Development for Clinical and Translational Research program to support research aimed at improving health outcomes in West Virginia, historically among the worst in the nation. An additional $251,843 was awarded to allow expansion of office and conference space for the Clinical Trials Center of Excellence.

With the new IDeA-CTR award, WVCTSI will offer innovative pilot project awards as seed money to establish new research and will broaden its many investigator development programs to include a research academy for sub-specialty fellows in training. Other new initiatives include statewide expansion of the Clinical Trials Center of Excellence and expanded data analytics resources that include a high-performance computing system and specialized tools for geospatial analyses. Also planned is the establishment of an implementation science center to maximize practical application of relevant research findings.

“I am very pleased that this funding is coming to West Virginia to support continued research that is relevant to the people of the state,” said Sally Hodder, M.D., WVCTSI director, associate vice president for clinical and translational science, and Chancellor’s Preeminent Scholar Chair at West Virginia University. “This funding will build on our foundation of success by strengthening our research infrastructure and the critical collaborative work with our partners and with West Virginia communities to positively impact health in the state and surrounding areas.”

Critically important to that mission is the statewide partnerships that include Berkeley Medical Center, Charleston Area Medical Center, Department of Veterans Affairs facilities in Clarksburg, Huntington and Martinsburg, Marshall University, National Institute for Occupational Safety and Health, West Virginia Department of Health and Human Resources (WVDHHR), West Virginia School of Osteopathic Medicine, WVU (including regional campuses in Charleston and Martinsburg), and the WVU Health System. Equally important is the outreach to West Virginia communities through the WVCTSI Practice-Based Research Network with 129 sites throughout the state and the WVCTSI Project ECHO program, offering programs in multiple subject areas (e.g., hepatitis C) to primary care physicians in 48 West Virginia counties and 20 other states.

“Having WVCTSI funding renewed by the National Institutes of Health for another five years is very exciting news,” said Gary Rankin, Ph.D., WVCTSI associate director and director of the Clinical and Translational Pilot Grants Program, and vice dean for Basic Sciences, professor and chair of Biomedical Sciences at Marshall University’s Joan C. Edwards School of Medicine. “WVCTSI is doing remarkable work to better the health and wellbeing of West Virginians. This award allows a strong statewide team of physicians, basic scientists, and other translational faculty and staff to continue their efforts to improve the health of all our citizens.”

Over the past five-year grant cycle, WVCTSI expanded the scale and rigor of research, contributing resources and expertise that resulted in 1,491 publications, 951 funding applications, and 743 external funding awards totaling $172.5 million brought into the state.

During the COVID-19 pandemic, WVCTSI investigators, in partnership with the West Virginia Department of Health and Human Resources, tracked COVID-19 activity by providing daily county-specific data related to COVID transmissibility and forecasting to better target testing.

Nationally, WVCTSI procured funding that enabled contribution of electronic health record data from West Virginia, as well as from 10 other states, to the NIH supported National COVID Cohort Collaborative (N3C), a database of nearly six million COVID-19 cases. Working with investigators across the U.S. and using the N3C database, WVCTSI investigators demonstrated that persons with COVID-19 from rural areas have a 40% greater mortality when compared to their urban counterparts. In a separate NIH initiative, WVCTSI is the leading institution for universities in 11 states, enrolling adults into the NIH’s RECOVER Cohort study to better understand the long-term effects of COVID-19.

“West Virginia University's mission to serve the state can't be met without strong links to our scientists, clinicians and the communities we serve,” said Clay Marsh, M.D., chancellor and executive dean for WVU Health Sciences. “WVCTSI has been a leader in creating a community of scientists who work across the state and the nation to conduct high-quality research relevant to West Virginians. This NIH grant renewal affirms the positive impact that WVCTSI continues to make and the value of its contributions to enhance translational science across the entire spectrum of healthcare.”

The new funding coupled with the overarching goal of serving as a collaborative hub to lead statewide clinical and translational research, positions WVCTSI to inform policy, practice and community changes that will lead to improved health outcomes in West Virginia.

WVCTSI is funded by an IDeA Clinical and Translational grant from the National Institute of General Medical Sciences (2U54GM104942-07) to support the mission of building clinical and translational research infrastructure and capacity to impact health disparities in West Virginia.

About the National Institutes of Health (NIH) and IDeA Program: NIH, the nation's medical research agency, includes 27 Institutes and Centers and is a component of the U.S. Department of Health and Human Services. NIH is the primary federal agency conducting and supporting basic, clinical, and translational medical research, and is investigating the causes, treatments, and cures for both common and rare diseases. The IDeA program builds research capacities in states that historically have had low levels of NIH funding by supporting basic, clinical and translational research; faculty development; and infrastructure improvements. For more information about NIH and its programs, visit www.nih.gov.