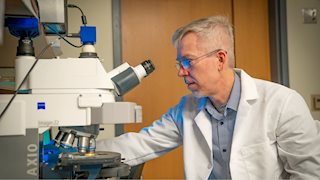 MORGANTOWN, W.Va. -- A new data-driven mechanistic approach that predicts cell types within tissue will help to reduce drug costs and treat diseases that were difficult to develop drugs for, according to a West Virginia University scientist.

David Klinke, professor in the Department of Chemical and Biomedical Engineering, developed and tested a mechanistic approach to predict the number and function of different cell types within a particular tissue and how they change when a malignant (cancerous) cell acquires the ability to secrete a protein.

“Ultimately, we want to develop drugs that broaden the clinical benefit of immunotherapies,” said Klinke, who’s also an adjunct assistant professor in the WVU School of Medicine and member of the Cancer Institute.

Mechanistic models have been created by hand by experts, but there are gaps in researchers’ understanding of biology because 90% of research publications focus on only 20% of genes in humans.

Research from this study, published in Nature Communications, sifts through large datasets to predict how secretion of one gene product by a malignant cell influences other cell types within a tissue directly from the data. This provides a complement to the hand-created models that play important roles in drug development.

“Under normal conditions, one’s immune system defends against infectious disease,” Klinke said. “However, most cancers arise through an evolutionary process of mutation and selection. Every cell has the blueprint in its DNA to make every gene product. In that process of mutation and selection, re-expression of some of these gene products may provide malignant cells with the ability to suppress immune response.”

Human tissues are made up of specialized cell types that are organized to maintain function in a changing environment. Ultimately, the functional orientation of cell types within a tissue interact to create a heterocellular network -- a network of many different cell types that interact to collectively achieve a goal. A heterocellular network is important to create and maintain tissue equilibrium.

While researchers know that tissue equilibrium is disrupted during oncogenesis, or the development of a tumor, there is no clear understanding of how genetic alterations influence the heterocellular network within human tissues.

Klinke said one of the barriers for broadening clinical benefit is that malignant cells create environments that suppress host immunity.

This new data-driven approach allows researchers to predict how a gene product secreted by a malignant cell changes the prevalence and functional orientation of other cell types within a human tissue.

Klinke said that studying how one event causes another is challenging to do in systems where it's difficult for researchers to see what is happening – like within an intact human tissue.

To test their predictions, using digital cytometry and Bayesian network inference, Klinke and his team examined immunocompetent mouse models of cancer. With this approach, Klinke was able to predict how a protein secreted by malignant cells alters the heterocellular network in the context of melanoma and breast cancer.

Digital cytometry, which is the measurement of the number and characteristics of cells, and Bayesian network (a probabilistic graphical model) inference were used because there are datasets available with these models that contain sequenced homogenized (similar) tumor tissue.

“We can change the expression of a gene and then see whether the prevalence and functional orientation of different cell types in the tumor changes similarly as predicted by the Bayesian network model.”

Klinke said the conventional approach to predict the functional orientation of cell types is to change the expression of a secreted protein and then quantify different cell types using different experimental approaches.

For this study, Klinke used mechanistic modeling to represent the mechanisms that support the biology and predict scenarios using simulation instead of actually testing the scenario in humans.

“These models are highly complicated but let me use a simple analogy,” Klinke said. “Say that we want to hit a target using an artillery shell and we have only one shot. Given our understanding of the laws of physics, we know that we need to know a few things about the projectile and all the forces acting on the projectile. Given this information, we can simulate with a computer that if we fire the projectile in a certain direction or angle, it will land in a certain location.

“Similarly, we know a lot about the underlying biology associated with a drug, but there are also some things that we don’t know, and we can’t test everything in humans. Given common conversations in the media about the high price of drugs, testing new drugs in humans is expensive and the vast majority of new drugs tested don’t work.”

Klinke said that one of the ways that mechanistic modeling and simulation can help is by providing a way to bring all the different pieces of understanding together in the same context.

“If there are key aspects missing, we run simulations to see if targeting some aspect of the biology with a drug makes sense. Mechanistic modeling and simulation have had an impact on a number of other industries, and this is now being applied to drug development.”

Klinke hopes that this research can be used in other contexts like cancers or immunologic diseases.

“Ultimately, we all care that when we get sick, there are treatments that can improve our health and not bankrupt us in the process. Like many other industries, the pharma industry is turning increasingly to mechanistic modeling and simulation to better prioritize potential targets and reduce the time to clinic. Collectively, this will help reduce drug costs and help treat diseases that were difficult to develop drugs for.”