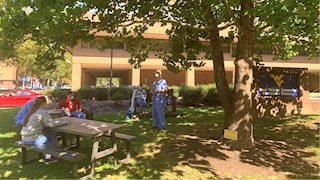 The tree is a direct descendant of the tree Hippocrates, typically referred to as the father of medicine, planted on the Greek Island of Kos about 2,400 years ago. Hippocrates considered the tree sacred and reportedly taught medical classes under it.

The late Dr. James Boland donated the tree that had been nurtured as a sapling with the hope that medical students at WVU would have the opportunity to learn beneath the branches of this ancient tree. Dr. Boland served as professor and chairman of the Department of Surgery at West Virginia University’s Charleston Division and clinical director of CAMC Cardiovascular & Surgical Services until his death in 2011.

The tree was dedicated in 2005 to the memory of Dr. Bert Bradford Jr. whose contributions to the community and the medical profession are innumerable. "Dr. Bradford was the most influential surgeon in the CAMC merger (General and Memorial Hospitals) and the affiliation with West Virginia University in the creation of the WVU Charleston department of surgery," Dr. Boland said at the time of the dedication. Dr. Bradford, who died in May 2000 at age 90, served as an associate professor of surgery for the Health Sciences Center of WVU/Charleston Division and was instrumental in establishing the CAMC Foundation in 1976, serving as executive director for nearly 20 years before being named president emeritus in 1996.

The medical student class of 2012 dedicated a bench in his honor and placed it in the shade of the Hippocrates tree to honor their teacher and mentor Dr. Boland. Since its planting in 2005, the tree has grown to tower over the area in front of the WVU Health Sciences building on the CAMC/WVU Campus.

Dr. Shane Monnett, an assistant professor of surgery and surgery clerkship director at WVU’s School of Medicine Charleston campus, is continuing this teaching tradition by bringing medical students to the bench and tables that have been added beneath the “Hippocrates tree.”

"I recall seeing the Hippocrates tree as an intern 2013 and hearing of the great and good teacher Dr. Boland,” Dr. Monnett said. read that his hope was for students to learn beneath the trees branches and as I grew in knowledge as a resident I often taught medical students there. I was blessed to be selected as the Surgery Clerkship Director for WVU Charleston and since that time we’ve been having regular weekly “class in the grass” sessions beneath the tree.

“I’m a firm believer that we should learn our heritage in order that we can become like those great teachers like Dr. Boland and Dr. Bradford who have gone before us,” Dr. Monnett said. “I am inspired to be the best teacher I can for the students when I’m under Dr. Boland’s tree. There is something special to that sacred place where I feel energized to instruct the surgical sciences and wisdom handed down from my instructors.”

It is Dr. Monnett’s dream to add more benches beneath the tree for students to reflect and learn from that honor important surgeons who made contributions to medicine and education at WVU and CAMC. “Surgeons Dr. Roberto Kusminsky and the late Dr. Robert Cochran were great contributors to the educational needs of WVU and CAMC and taught countless students and residents through the years.” Dr Monnett said. “I personally use thyroid dissection techniques handed down by Dr. Kusminsky to Dr. Tiley and now to me, and I would not be as capable a surgeon without the legacy that all of these teachers set before me.”

The Hippocrates tree can be seen as you enter the CAMC/WVU campus from MacCorkle Avenue at 31st Street in Kanawha City. On these cool Fall days, you may get the opportunity to see a class gathered under its branches learning their craft just as Hippocrates envisioned 2,400 years ago.